~ THE TURTLES WELCOME YOU BACK! We are once again OPEN for Public Tours. CLICK HERE for information. ~

Found in a pound net, thin, not eating. Rescued by fisherman and long time turtle friend, Lennie. Lennie (the human) is soon to retire and he will be missed.

Lennie was admitted with blunt force trauma to the head, an easy diagnosis considering the obvious damage to her skull and eyes. She was also thin and lethargic, but unlike the emaciated “Barnacle Bill” turtles we get, we knew Lennie’s condition was directly related to the head injury and the resulting poor vision.
​
She was literally “dazed and confused.” We surmised that, for all intents and purposes, she was blind in her right eye. It was sunken and atrophied. But we were operating on the hope that her left eye, despite being damaged and covered partially with a film remained somewhat functional.
​

At first Lennie refused to eat, but soon we realized she wasn’t just being stubborn. She literally couldn’t find the food we were giving her, so it was time for us to adapt to her condition. That meant feeding her small pieces of squid and filleted fish, one at a time and held directly under her nose. We all cheered when she took that first bite, and once she had her  wait-staff trained she couldn’t get enough to eat.

But what to do with a turtle with bad eyesight? Contact “Wendy’s” ophthalmologist, of course. So right after the holidays Jean and Lennie made the trip to Virginia for an exam and consult with Dr. Brad Nadelstein, DVM, ACVD. I could give you all the technical terms for the tests, and for the problems he found, but the bottom line is: Lennie is blind, and surgery wouldn’t help.
___________________________________
So now we have a blind, but otherwise thriving sea turtle with no hope of being released. That’s when the really serious thinking and discussion starts to happen. Could she be happy living permanently under our care? Because she grabs at her food so eagerly, we think she has at least some sense of smell. We know she hears, because she’ll turn her head and follow your voice when you talk to her. She’s not very big right now, so even though she’s in one of our smaller tanks she isn’t showing any signs of depression from being confined. In fact, she may feel quite secure because her environment is so limited and familiar to her. If she’s taken from her tank the flippers fling forward in the typical sea turtle defensive posture, but if she hears a familiar voice he’ll immediately relax. She especially enjoys her weekly massage from Miss Peggy.
​
Lennie will be closely watched, and showered with love for the next year or so as we observe her behavior and look for any signs that she’s unhappy. If things go well, Jean will begin the process of petitioning for the necessary federal and state permits that will allow us to keep Lennie as an “educational turtle.”
​

Lennie’s gender was unknown for several years until an ultrasound revealed her secret.
She has adapted to life at the sea turtle hospital. She finds her food by swimming along the bottom of her tank and nosing into it.
She loves to get her back scratched as part of her morning routine.

You can meet Lennie when visiting the KBSTRRC.
​ 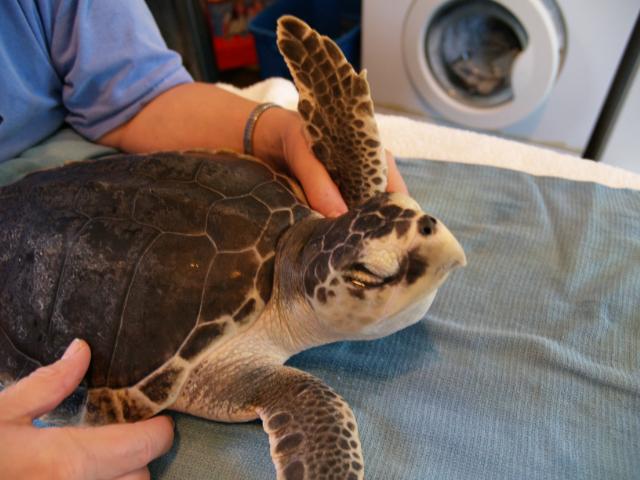 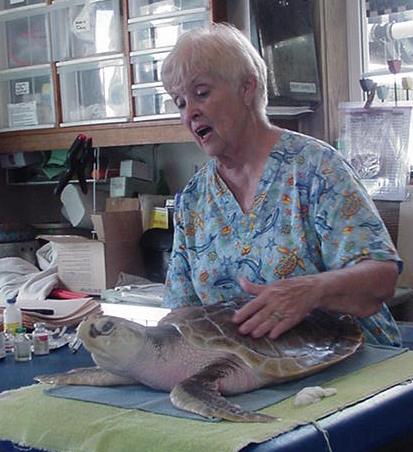 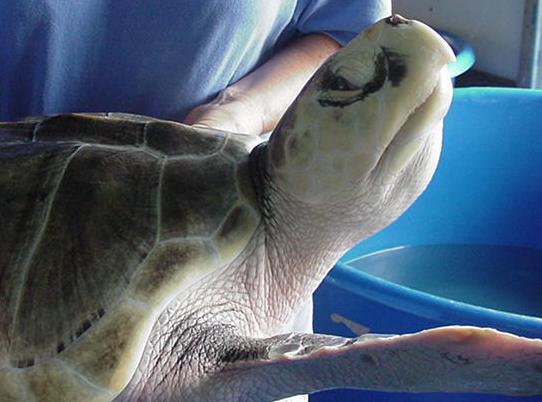